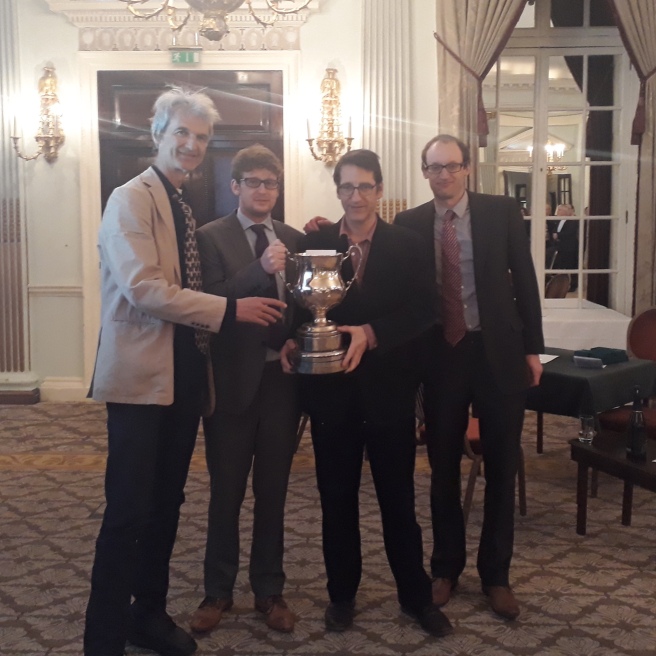 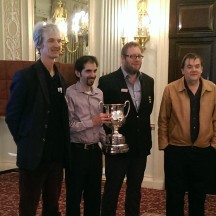 Willie Coyle started his career as a teacher and later moved into school administration. For these services he was awarded the MBE in 2003. Willie has played for Scotland on numerous occasions. He has four Gold Cup wins to his credit, and has played for Great Britain in six European Championships and Olympiads. He was in the Scottish team that won the bronze medal in the Senior Teams in European Championships and played in the D’Orsi Bowl in Bali in 2013.

Stelio Di Bello is a former Italian Junior champion who moved to London in 2007 where he established his own software development company. In the Junior categories he won two Junior Teams World Bridge championships with the Italian team in 2003 and 1999 as well as a European championship in 2002 and a school European championship in 1998. In the open category, he got a second place in the European Pairs championship in 2005 and a third place in the Champions cup in 2005 and several Italian championships and international tournaments. He was in the London team that won the 2016 Tollemache. Stelio has more than 20 years of bridge experience, he loves fine bidding, studying and creating artificial conventions/systems.

Victor Silverstone is a six-times Lederer winner. He has represented Great Britain in two European championships, has won three Gold Cups and played for Scotland in over two dozen Camrose matches. Victor has won the English Senior knock-out trophy four times and was in the Middlesex team that won the 2015 Tollemache. He was in the Scottish team that won bronze in the Senior Teams in the 2012 European Championships and played in the D’Orsi Bowl in Bali in 2013. Despite all this he lists his greatest achievement as getting 79.5% at the Acol, playing with his wife.

Tom Townsend, 49, lives in Shepherd’s Bush with Ewa Kater and their son Max. Tom was part of the junior team captained by Raymond Brock, which won the 1994 European and 1995 World Junior Championships for Great Britain. He’s played numerous times since then for England at Open level, most notably in the 2008 Olympiad in Beijing, where England reached the final and lost to Italy. Tom is the Telegraph and Sunday Telegraph bridge columnist.