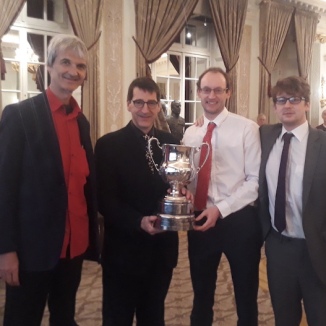 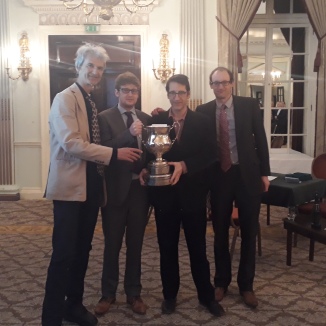 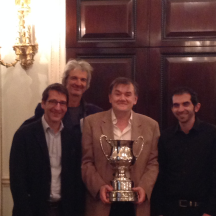 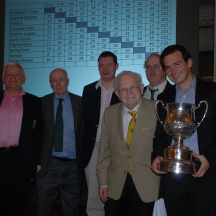 Sally Brock has been playing on the English women’s team (on and off but more on than off) for the last 35 years or so, first as Sally Sowter, then Sally Horton and finally as Sally Brock, having married Raymond Brock (d2008) in 1993. In 2008, after a period of semi-retirement, she formed a last-minute partnership with Nicola Smith. They were part of the English team that won the 2008 World Mind Sports Championship. Together they won two European and two World Championships.

More recently Sally has formed a partnership with Fiona Brown and they won silver in the 2017 Venice Cup. After a break from women’s bridge to play for England in Mixed events she and Fiona are again representing England in the European Championships this year. Sally lives in London and has three children, Toby, Briony and Ben, and a grandson Hayden. These days her partner in life is Barry Myers. See Sally’s EBU profile.

He is also a popular bridge journalist, writing his own columns and often ghost writing for Zia Mahmood.

Brian Callaghan was born in 1952 in Ealing. His education was at Alleyne’s Grammar School, Stevenage and at Trinity College, Cambridge. The first quarter-century of his working life was as an IT professional, until cutbacks prompted him to turn to bridge to earn his crust. He is now mostly retired, but still does some work in bridge. He lives in London in the Barons Court area with his wife Chris Duckworth and their cats.

Whilst still at school his early card game was solo whist. Searching for more of a challenge, he and some schoolmates upgraded to bridge via self study, helped by a library of bridge books belonging to Brian’s father. University brought him into fruitful contact with what later turned out to be a very strong group of players, amongst whom the most successful in bridge were Graham Kirby and the late John Armstrong.

His bridge career went from strength to strength and he has played for England in 6 Camrose matches, 1 European and 1 Olympiad and he has won most of the major national competitions. He also enjoys playing in tournaments worldwide, and was delighted to have been on the team that won the NEC Cup in Yokohama, Japan in both 2002 and 2003. Nowadays he travels mostly with Chris and they particularly enjoy playing together in the Gold Coast tournament in Australia.

Ben Green was extremely successful as a junior player, and repeatedly represented England in international events. His most recent success on the national scene was winning the 2013 Premier Grand Masters Pairs with John Holland.

Ben also won the Gold Cup in 2015 and a silver medal in the Commonwealth Bridge Championships in 2014. He and Stefano Tommasini will represent England in the European Championships later this year.

Barry Myers has won the Hubert Phillips in 2014, the Tollemache in 2013 and 2014, and was a runner-up in the Gold Cup in 2015 – all when playing with Sally Brock (who is also his partner away from the table). He has made two Camrose appearances: with Robert Sheehan in 1986 and again in 2015 playing with Sally. He believes this is the record for the longest gap between first and second caps.
Barry gave up the game for a number of years when he read for the Bar. He is still a practicing criminal barrister and between that and playing bridge he has little time for other hobbies. See Barry’s EBU profile.

Stefano Tommasini is originally from Brazil but now lives in London. He and Ben Green will represent England in the European Championships later this year.